What happens after a writer gets an acceptance from the publisher? A whole lot of things. There’s the contract to sign, which is fun. The publisher promises to publish your book and even pay you a little money in advance for the right to do so. Yahoo to that. Then comes the editorial letter. Not as much fun as the contract I must admit.

It comes as a surprise to some new writers that their book will require further rewriting beyond all the rewriting they’ve already done. It will-- in most cases. I haven’t heard of many authors not doing at least one revision. Several revisions are more common.

What begins this process is a letter from the editor making suggestions. I’ve received a few of these now from several editors. They’re all different, but they all have some similar qualities. They begin with praise (anyone who is in a critique group knows the importance of this—the fragile writer ego needs a little love). Then the editor mentions some problems he or she thinks the manuscript has. Then he/she says that, of course, the writer should decide which suggestions are helpful to the writer’s vision of the book and which are not. After this though, the approach of the editors I’ve had varies. Some like to mention a problem and then spend some space explaining why they think it’s a problem and then move on. Some like to spin out possible ways to fix a problem. Usually, the first revision letter focuses on big issues of narrative or character. I say first because, again, you will most likely go through several revisions after the acceptance.

This sounds like it might be hard and I know some writers struggle with these revision letters, but provided you have a good editor (most are, I think, and all of mine have been) these letters are another chance at the manuscript. And who doesn’t want another chance to make the manuscript better? Really. Later, when the book goes out into the world and is reviewed and read by readers, you’ll be grateful for every single improvement made by every single revision. It’s hard to write a book. A good editor can really improve a novel and a writer should be grateful for all the help he or she can get.

So, after the thrill of acceptance, the first big step is going back to the manuscript and trying to make it better by going through the revision letter carefully. I try to be open to every possible change, but I know pretty quickly that some suggestions don’t work with my vision of the book. Others I think are definitely good points I need to work on. A lot I have to think over and work through because I’m just not sure about. So, my advice is not to blindly accept or reject any advice in an editorial letter but to read it through several times, make some notes, then get rewriting. Some suggestions I can’t decide about until I’m in the process of revision and see how certain changes affect the rest of the novel. It’s all part of the process.
Posted by Brian Yansky at 7:16 AM 5 comments: 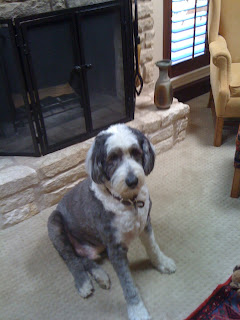 My sheepdog gave me some advice the other day, “Never take a bath. How will others know who you are if you don’t smell like you?”

Opps. Wrong advice. I meant some writing advice. He said, “Sheep like to wander. Sheep will wander at the first opportunity. You must be vigilant when you are herding sheep.”

That got me thinking about story and the way I struggle to figure out what really belongs. I think that it is easy, easy, easy to be distracted by all kinds of interests: language, interesting thoughts, diversions of all kinds. They make us take our eyes off our sheep and some of them wander off. The novel looses narrative momentum. A novel needs narrative momentum. It has to have it. You have to get all of your sheep from point A to point B. Don’t let your sheep wander.
Posted by Brian Yansky at 5:02 AM 6 comments:

Kurt Vonnegut on the Shapes of Stories

I don’t know if any part of writing confuses me more than structure. I struggle with it all the time. What’s the shape of my story? How do I get all that STUFF to fit together? There are so many freaking concerns in writing even a simple story. We writers are juggling character, plot, theme, language and a dozen other things with two inadequate hands and a bit of delusional grandeur. And then, on top of this, we have to somehow create a structure that houses all of our intentions and connivances and deviations, that provides just the right architecture for all that we want to put into our story. It’s hard. Really hard. Or so I thought until I saw this explanation sent to me by my good friend Varian who knows that Kurt Vonnegut is one of my favorite writer people. Thanks, Kurt, for putting it all in perspective.


Posted by Brian Yansky at 5:14 AM No comments:

Sold a novel, which is a big thrill. It's the second one I've sold to Candlewick. I'm honored to be published by such a great publisher. Here's the Publisher's Lunch notice.

Brian Yansky's FIGHTING ALIEN NATION, the sequel to ALIEN INVASION AND OTHER INCONVENIENCES, which continues the story of the survivors of an alien invasion, again to Candlewick, with Kaylan Adair to edit, by Sara Crowe at Harvey Klinger (world English).
sara@harveyklinger.com

So it's another alien book for me. I guess I'm going through my alien period. Thank you little green men.

So let's say you have a story and your character, late at night, hears the sound of a baby crying outside his house. He's falling asleep but it startles him awake. The crying continues and he jumps up and swings open the door and steps out into amoonless night.He finds a cat sitting on his front walk.

So we want a sentence about this.

The sound of a baby crying and a cat screeching were similar.

SIMILAR as used here is definitely lightening bug for me. Oh, it does the job, sure. But it drags the whole comparison down. Maybe, too, the writer is making some deeper observation about how easy it is to think one thing is another, so the weakness of the word "similar" weakens the whole comparison. So much on just one word? Well, yeah. Let me try again.

A baby crying and a cat screeching are strikingly alike.

STRIKINGLY as used here is still lightening bug to me. Again, does the job. Not bad. Better than the first. Almost?

A baby crying and a cat screeching are erily alike? ERILY? Lightening bug. I'm not sure why exactly. Maybe too predictable?

A baby crying and a cat screeching are unforgivably alike. UNFORGIVABLY? For me that's lightening. Of course that kind of sentence makes a point and so the scene should be following this sense of two things that shouldn't be alike being alike and this situation should somehow be an echo of what's happening in the story. But, for me anyway, this is the right word for this sentence.

So much on the right word? I think so. Certain words in certain sentences need to be right and not almost right.
Posted by Brian Yansky at 4:58 AM No comments: