Tip number one is that you can’t really see your manuscript problems without distance. So after you have a solid first draft it’s helpful to get some perspective. Put it away. Take at least a week off  but a few weeks or a month might be better. You need the time so when you come back you have distance.

Tip two is a tip I read in Rachel Aaron’s 2K-10K. It’s about approach and it’s really been a big help to me. Work through the manuscript focusing on different problems. Start with the big problems. Like, for example, the motivation of a character is weak or the progression of a plot point isn’t clear or maybe not fully developed or an element of setting isn’t believable.  You identify these big problem. THEN---and this is the R. Aaron idea that was really helpful to me—you work on each problem separately. You don’t work through the manuscript in a linear way. You try to really focus on one problem at a time. Say you work on the motivation of one character. You work through chapter 1, 8, 19, 22 etc.… if that is where the character’s POV is or where the characters main scenes are. You just focus on this problem and then you go onto the next one. Like mentioned in an earlier post, I suggest you write out a bit of thinking (freewriting) on the scene you’re working on before you start it. This will really help you hit the main problems in a way that will keep you focused and engaged.

Tip four---change font. Print out a copy. This will help you keep a fresh look at the work. Now work through the manuscript in a linear way..

Tip five—Go through at least once looking for ways to improve language and whatever you can catch. This will probably be several passes. In the last one try to work on grammar.

Tip six--Give it to someone else—maybe several people---to get feedback. You’ll need it. Rework after considering feedback.

Revision is a gift. We can’t revise our lives in this way, but luckily we can revise our stories.
Keep writing.
Posted by Brian Yansky at 6:25 PM No comments:

WHERE DO YOU GET YOUR IDEAS? AND AN IDEA FOR A NOVEL

Most fiction writers write from a parallel universe. We drop into an altered reality by using written words to create whole worlds, people, and stories about those people. It all comes from thin air. Or does it?

I started my novel playing with this idea about imagination. It’s not much of a thought, not developed in any way, but you don’t need much, just a spark. What this spark has to have, what’s essential, is that it’s enough to catch fire.

But when readers ask writers where their ideas come from (some come up with elaborate stories, some just fall back on claiming the Idea Store and so on), they’re really asking where the initial spark comes from. No one knows. Here’s Neil Gaiman on where he gets his ideas. Spoiler alert. HE DOESN’T KNOW. https://www.youtube.com/watch?v=-C48jAkVlI0

My advice to writers is trust your intuition. Brainstorm. Come up with many ideas. Find one that will catch fire.  In other words find one that you have enthusiasm for. The characters and setting and story will come if you you’re excited about your story and you can keep that excitement. I’m not saying it will be great or even good novel but I am saying you will likely finish it. That’s a big step and a fine accomplishment. If you finish a work, you have a chance to make it the novel you hope it will be when you start.

In my new novel, A True Story from a Parallel Universe, I began with thinking I would write a true story from another universe because who, given our current restrictions on travel, could say it wasn't? Then I wanted that world to be different and interesting. So I did the what if question-- what if there was a world where any creature, fantastic or otherwise, that our creators of myths, books, and movies have imagined were real? I could have fun with that. Off the top of my head I thought of vampires, zombies, wizards, witches, ghosts, characters from Greek myths, Egyptian myths, legends like Big Foot, but as I wrote  I came up with many more. What if they were just natural to that world?

I started with this idea and with the idea of a main character who would have supernatural abilities but wouldn't know he had them at the beginning of the novel. Often I start with just a little thought about character and setting and tone and I'm off. The tone for this would be humorous--a little goofy, a little dark in places. My favorite funny people--those who do it for a living and those who do it just because they do--are the ones who mix a little serious in with their funny. One of my favorites right now who does it for a living is Russell Brand. He’s got this goofy absurdism about him—his delivery and his riffs—but there’s something more—astute observations about people and all kinds of things that give his comedy a little bite. All in good fun but it’s there.

So I had a spark, and developed a few ideas about character, a little about tone, a little about setting. I was excited. That got me started on my process for working on story and I was off. The result is this novel.

Thanks for reading my blog. Here’s a link to my novel. I’m launching this week so I’m discounting it down ito 99 cents thru Saturday and giving it away for free  next Sunday, August 9 and Monday 10. https://www.amazon.com/Story-Parallel-Universe-Detective-Agencyebook/dp/B08DYFYL9Q/ref=sr_1_1?dchild=1&keywords=Brian+Yansky+A+True+Story+from+a+Parallel+Universe&qid=1596311023&sr=8-1 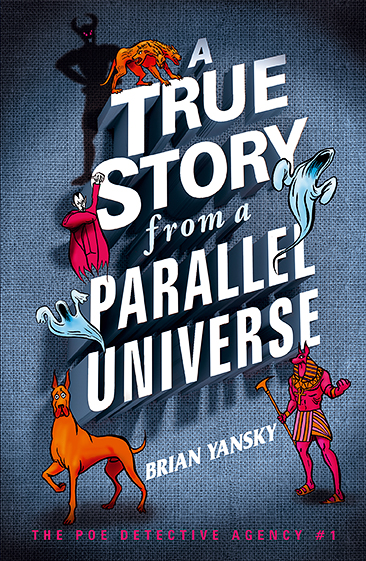 Posted by Brian Yansky at 1:03 PM No comments: