The Mad Scientist's Son #1--No heart

I'M GOING TO TRY GETTING AT THE WRITING PROCESS IN A NEW WAY, NEW TO THIS BLOG ANYWAY. I'm writing a diary as I work though a manuscript. I hope I can talk about different aspects of the writing process and it will be fresh. I enjoy writing about writing, but I've done it for a while now and it's all getting a bit stale. New is good.

Here's where I am in the novel--I've written a first draft. My first drafts are neatly crafted works of art. HA. We're talking a hurl of words. We're talking a writing GPS that has schizophrenia. We're talking wandering all over the place. We're talking get-those-words-on- the-page-and-worry-later-if-it-makes-sense mentality because that's the only way I know how to do it. So my first draft is as rough as a Charlie Sheen breakup or breakdown or something like that. So, yeah, we're talking rough.

But it's done and I'm about halfway through my revision. So that's where this diary picks up.

So here's a place to start. My first thought this morning.

Crap. It's got no heart.

The manuscript has some things going for it, but there’s no heart. It’s the freaking TIN MAN of novels. 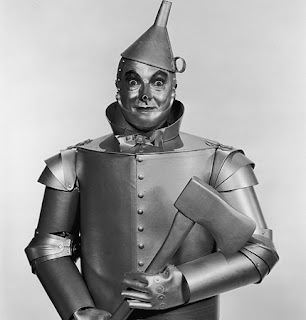 Maybe it was my focus on other things, especially the central idea of the novel that led me to my heartless manuscript. How do I get heart?

Go back to the beginning. Think about what the character wants/needs/ desires/ wants. I need to regroup and try to think this through.

On the surface he wants to find his father. He needs to find his father. That does help drive the plot. Okay so maybe I get more heart if I develop the relationship between the father and son more. Cause it’s there but it’s not there there. Needs to be there there.
But that’s not enough. It’s a good surface need, but it’s not really something that can give it HEART. I mean I want HEART. I need HEART.
Maybe identity is the heart. Maybe I need to make Frank more the outsider. I mean he is (he’s the son of a Mad Scientist but in this world Mad Scientists are sort of accepted and tolerated in the way that writers and other artists are in our world--sort of) but not enough maybe.

And it’s something I can do. I felt that way when I was sixteen. Maybe partly because I was adopted but mostly because I am who I am (Did Popeye the sailor man say that? Am I quoting Popeye the salior man now?). Anyway, I still feel that way sometimes. I can do this.
Posted by Brian Yansky at 9:27 AM 2 comments:

As I work through my first drafts now, while I keep pushing forward and resist the urge to start all over (always there in the early draft), I’ m constantly thinking about how my story fits together. How what happens in chapter one fits with what happens in chapter twenty, for example. My first drafts are rough, rough, rough, more like discovery drafts, but I still keep this idea of connection in my mind because I don’t want to wander too far off. I don’t want to end up lost like some authorial Columbus asking, “Say, can anyone tell me the way to China? It’s supposed to be around here somewhere.”

Then my revision, at least the part that doesn’t focus strictly on language, is about making these connections clearer and filling in my story.

And that’s what I’m getting at in this post. Novels are all about connections. Story arc, character development, all that comes out of connections that the writer makes during the process and then manages to convey dramatically in the work. Everything has to fit together. I think that keeping this in mind helps me with structure.
Posted by Brian Yansky at 5:36 AM 2 comments:

Everyone works differently. I’ve said before I can’t outline and I can’t. But I think my first drafts are becoming more and more discovery drafts. I don’t even pretend anymore that I’m writing something close to finished.

I think part of this is because I realize that for me, in terms of structure, something I find out about a character on page 57 is going to change that character and maybe the story on page 3. Because a first draft is so much about discovering character and story and trying to integrate all the elements of fiction, I think it needs to be fluid.

You’ve got to be open to changes, big changes, at a structural level, not just changing words in sentences or moving sentences around in a paragraph.

So these days my first drafts are filled with places where I just mark what is going to happen.

My first draft is also filled with notes to myself. But it is a draft—not an outline. I have to try to muddle my way through the world I’m creating to feel like that world, however sketchy, exists.

But I know that my first draft is like an out- of- focus photograph. It’s impossible to see how it will be when it sharpens. There will be many choices ahead and there will be many chances to make connections. It’s kind of exciting and frightening. Finishing a first draft means both less and more than it once did when I believed my first drafts closer to a final version. One great thing about knowing my first draft is kind of a discovery draft is I don’t have high expectations, and I think that makes it easier for me to keep working when I face difficult moments in that draft.

OR SO I THINK TODAY.
Posted by Brian Yansky at 6:12 AM No comments:

Generally, I believe you should push forward in a first draft, letting your subconscious mind do most of the work. Of course you’re going to mull things over while you’re in the shower or driving to work (pedestrians and other drivers beware), but when you’re writing you’re mostly trying to get to that quiet place where you can create and experience it all at once--that, as Robert Olen Butler calls it, moment-to-moment experience of your story. However, I can’t do this without a true voice for my narrator. I can’t get there.

I’ll write ten or twenty pages sometimes just to see what happens but I’ll keep going back to that first page and toying with where the story starts and what the narrator’s voice is. For me voice is extremely important. That tone of the story helps me feel truly at home in my world. It’s essential for me that I get that early in the process, however imperfectly, to open up my story.
Posted by Brian Yansky at 10:30 AM 4 comments: