How to Write A Novel In Three Months 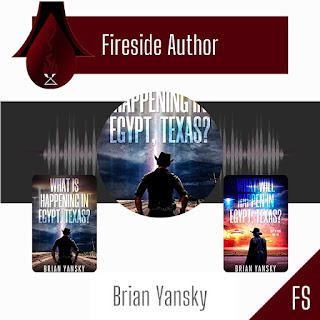 Though I self-published these two novels, Fireside Audio has picked them up for their audio line. Very happy to be working with them.

Zoom: How to Write A Novel In Three Months
This is the third of three entries on writing “What Will Happen In Egypt, Texas” in  three months, which is freaking fast for me. The novel will be out on Saturday, July 23. I am not a fast writer by the standards of many self-published writers though by trad publishing I’m fairly fast, about two novels a year.
So, three months is in fact, freaking fast for me.
How did I do that you ask? Zoom draft.
I’ve written about my Zoom method twice, so if interested just scroll back  a couple of entries.  The main thrust of my zoom method is that I try to write a rough draft, a short one, in four, five, six days. IA draft between 10000-15000 words. It’s more than an outline because I’m actually writing scenes BUT it is much less, obviously, than a full-length rough draft. It is, however, and this is very important, a full draft, beginning to end.  I came to this, in part, because I realized how much I change my rough drafts.  I mean my mantra for a first draft has always been LOW EXPECTATIONS so I have been aware of this problem for a long time. I spend a month to six weeks writing a draft that I mostly revise into non-existence.
Only good thing was I didn’t print the first draft out and add to the environmental crisis by wasting paper.
OK, back to Zoom draft. Four, five days, done. And then I revised and revised and revised because revision is where whatever magic I’m able to create happens. A story forms. Characters pop up to live in that story. A world pops up around them. Etc.…Etc...
What I found was that the first and second revisions were mostly adding to the novel’s length. I think by the end of the third draft it was at about 61000. Each of these drafts took maybe three weeks.
The story definitely changed a lot  but many of the changes were going deeper into character development and adding plot. Then I did a draft where I just went through trying to make the plot better, more interesting, more compelling. I advise that you do this at some point in your revision. Focus on one thing and go through the manuscript and improve that one thing.
I did one revision just working on language and tightening up scenes. Then one final draft for polish.
You probably think this is a lot of revision. It is. But that’s just the way I work. Hence, the importance of my zoom draft. Because  I did it so fast and it got me into the world of the story, the characters, and setting, I was able to spends months on revision and still have a finished novel in about three months.
So that’s good.
Plus, I’ll be honest, there’s a real rush to writing a draft in four-six days. And I think I can improve on how I write my next Zoom draft and so maybe I’ll improve my output and quality.
Happy Writing,
Brian
Posted by Brian Yansky at 7:08 AM No comments: