HOW SETTING BECOMES A CHARACTER

Setting is the poor relative in the fiction-writing craft family. We give character, language, voice, plot, a lot of attention. Rightly so. But setting also deserves some love.

So here are two ways to think of setting. The first narrow. The second broader.

Narrow-- character development: where your characters live. Her house or apartment. The places your character goes to have coffee or eat dinner or work. All of these are an interaction of character and setting and the setting helps reveal character. Maybe think about this in revision and use setting to develop and deepen character.

Broader picture: For some writers, in some manuscripts, setting becomes a character. This can be a very powerful and distinctive characteristic of a writer's work. From the reader’s side—they can be drawn to a certain writer because the setting creates an atmosphere. Think Philip Marlow in LA; Raymond Chandler’s noir atmosphere comes , in part, from his evocation of setting in his novels. There are many, many examples, including the  many examples in fantasy and sci-fi where the worlds need to be clear and present in the story.

One way to think of setting is as a character. I know that I did this in my novel—out early next year--http://www.goodreads.com/book/show/22747808-utopia-iowa. The town of Utopia, Iowa, became a major character. I loved the eccentric people that lived there and the mystery of its past and the threat of dark forces drawn to the town because of its past. I began to think of the town itself as a character and that (I hope) helps build an atmosphere in the novel and contributes to the overall tone of the story. But it also helped me develop a connection between setting and character and plot. To me, so much of the process of writing a story comes from making these connections.

Here's an exercise on the importance of setting in a more focused way—to build character.

Describe the place where someone lives just by the details. The details that you choose reveal the character.

A man who has separated from his wife and family but wants to go back to them.

A man who has separated from his wife and family and doesn't want to go back to them.

A high school student's room—he’s lost and partying too much.

A high school student’s room—she’s an A student.

A girl or boy who doesn’t have a place to live.

A boy and girl who are seventeen and have a child.

This could go on and on. The purpose of the exercise is to focus on how setting can evoke and develop character.
Posted by Brian Yansky at 6:58 AM No comments:


First my disclaimer—I’m a reluctant promoter. I try now and then, but I struggle with that part of being a writer. So I’m inexperienced. But I have been reading up on it a little, trying to know more.  One thing I keep reading is that writers have the opportunity to connect directly with readers, thanks to social media, in ways they never could before. So although the gatekeepers and influencers are still important, there seems to be a lot of potential to let readers know about your work without going through the middleman or woman. The problem is how do you make that connection?

There’s a much-quoted line from Cory Doctorow, author of Little Brother and co-editor of Boing Boing, “The problem for most artists isn’t piracy, it’s obscurity.” Yeah, that is a problem. I kind of have that problem. His point is a good one, I think-- you should give away as much content as you can because the worry shouldn’t be that you’ll give away too much; the worry should be that no one will read what you give-away or what you or your publisher sells.

Of course Amazon and now publishers give away the first few chapters of books to try to get readers interested.  The SAMPLE has been around for a while and I’m a big fan of it. I usually read the sample of a novel before I buy it even if friends have recommended the novel.  But the SAMPLE—in most cases-- isn’t available until around publication.  It made me think that it would be nice if that kind of experience or an experience like that could be available before the book was published.

So my idea is pretty simple (it may have been done before but I haven’t seen it anywhere). You give away a short version of your novel before it’s published. What I did was make a 2-minute novel that is something that a reader can read in less time than it would take to listen to a song. I took select lines from my novel that comes out on Feb.10, 2015 --Utopia, Iowa-- from the beginning to the end. I posted it to my website. Here it is if you want to take a look at the post: http://brianyansky.com/2-minuteUtopia.html

I was careful not to give away the secrets of the story, of course. I picked lines that I thought were interesting or funny or revealed a little character or plot. I wanted it to be fun and short. More than anything I wanted to give a feel for the novel so that if someone read the 2-minute version and liked it, they might be interested in the full 300+ page version when comes out many months from now.

So here are some reasons I think this is a good idea and something you might try with your novel:
*It’s easy to do.
*It’s kind of fun.
*It’s basically free.
*You have something you can show readers before publication.
* The 2 minute version will remain on my website through publication so it isn’t a one-shot promotion deal. I did put it out there when I got my book cover but I can keep referring people to it as time moves closer to the pub. date and I do other promotions.

Will it help? Who knows?  But as a reluctant promoter I’m all about small steps; if it makes even a few readers aware of and interested in Utopia, Iowa, I’m happy. 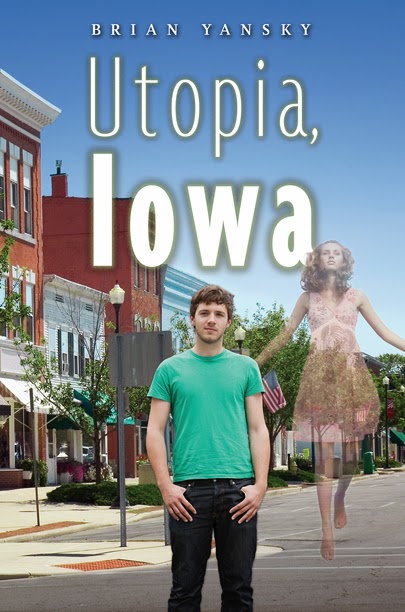 Posted by Brian Yansky at 2:56 PM No comments: