Why do I write?

Sometimes I wonder why I have this compulsion to create characters, to worry over a sentence, to make stories.  Why do I do it?  There are many answers. A list of them wouldn't be hard to make. But there's also no clear answer.

Why do we love the things we love?  And the answer to this, like the answer to why I write, is a mystery buried deep beneath the layers of reasonable and perfectly acceptable answers.

I've always loved dogs. Always loved stories--movies, comic books, and then books. I've loved people. I love some people. And the list could go on...because there are a lot of things I love but...I write out of obsession and dislocation and attraction and habit and...need...

Writing makes me happy, sad, angry, satisfied. It feels like I have a purpose. Finish the story. I'm almost always working on something and, whatever else is going on in my life, I have this story that needs to be finished. Writing is thrilling,  difficult,  annoying; it's a lot of things at once. Maybe above all  it's compelling. Writing stories compels me to move through my days, my weeks, my months.  I want to get the damn thing finished--though of course there's always a part of me that doesn't because then I'll be pulled from the world of that story and into the uncertainty of a new story.

So in a way there is this constant in my life. The many changes, the moves and stands, the trials and the failures and successes, the life I live, always has this going on in it. A story I'm trying to tell. A story that needs to be finished. So maybe that's my best answer. I write to finish the story.

So there are many, many ways to begin a novel. Some people start with ideas--I do sometimes--and their process is to attract other ideas and build characters and story from this idea beginning. Others start with a bit of story--this happened so... They make up characters that will help them build their story. They develop them Or maybe they already have characters in mind because the origin of the story is an article or a some spin off a movie or something that happened to them or someone they knew. Some writers begin with a single scene idea or even an image. I read one novelist say he began a novel with someone he once saw--a girl on a boat leaning on a rail and looking down at the sea.

Point is--writers work differently. Not only that but sometimes a writer will use different methods for different stories. Creative types are that way. T I've started a novel with an idea. Alien Invasion and Other Inconveniences started with a simple idea--what if aliens invaded the earth and killed off almost all the population? What would happen to the survivors? And the story, beginning with that premise, took off for me.

BUT most of the time I start with a character first and a situation.  Let me give you some examples.

A boy and a girl fall in love but their families are at war.

A young man thinks his uncle killed his father but his uncle marries his mother and the young man struggles with taking action against the uncle.

A ship captain becomes obsessed with hunting down a big water mammal.

A girl must compete in a state ordered game to the death; if she doesn't kill everyone, including a boy she's known since she was a child, she will die.

These may look a little familiar but, hey, most stories have been told. It's your particular spin on them that makes them completely new. But really--there are an endless number of situations you can imagine characters in. Be creative.

This is just the beginning. Some hard work--developing the character in the situation-- is ahead.  There are many ways to approach this too. That's kind of a theme of mine when I talk about writing. THERE IS NO ONE WAY. Find the way that works for you. I'll get to some approaches on developing an initial situation and character next blog.
Posted by Brian Yansky at 4:36 AM No comments:

One Simple Way to Help You Write Better Fiction(language)

I think the tell and show problem happens because in the throes of creation we're grasping for main points of action and reaction and variations of them. We want to get them down before we lose them. I do this. A lot.

So what happens is we get the structure of a paragraph wrong for fiction. Our paragraphs, in an inexperienced writer this can be many, many paragraphs, become structured like we learned to structure them in our high school essays. Topic Sentence. Development of that topic sentence. Repeat and repeat and repeat.

We tell the reader what we're about to show them and then we show them.

And we don't see it because we tell ourselves we are showing. But the problem is we're telling first and then we're trying to show with the rest of the paragraph.  Causes lots of problems. For example, it drains a paragraph of suspense. If you tell the reader what will happen first and then show it, well they know, don't they. It makes the paragraph feel repetitive and sometimes clunky. Often it will even undermine development of the paragraph because the author won't see choices he would if he were in the mind of his character moving forward. Above all, it weakens the verisimilitude of the paragraph.

Instead of telling and then showing--just show. We want our paragraphs to stay in the POV of the character experiencing the scene. We want to experience it with them. See it through them.

Like I said. I still tell and show. But in revision I'm conscious of this problem and I look for it and do my best to stay in POV. I think it's made my fiction stronger. Hope this helps.
Posted by Brian Yansky at 6:03 AM No comments:

Once I know the ending, and sometimes this takes me a while, a draft even, I can start figuring out how to design my novel. I need to know where I'm going  to know how to get there, to make every scene work toward that destination. Endings, so important.
Posted by Brian Yansky at 5:02 AM No comments:

Most important? Write like you. Who can do that better? Find your way of expressing your way.

It's hard at first. New writers often want to write like the writers they love. They mimic them in various ways. That's OK. Writers will get past trying to be the writers they admire if they keep writing. You can't be those writers. Only they can so...

Write what you love. Write what you love to read and watch. But also write from your passions, things that you care about, people, your life. You are unique and you will write in a way that is like no one else.

Keep experimenting, evolving, trying new things that are just beyond your abilities. Being you doesn't mean you write one way. It means you write with all the complexity that is you. And you grow and change as a writer. Embrace that.

Writing is a journey. It's a life-long journey and the journey is what's most important. You may never find the perfect you or the perfect story but the search--frustrating, rewarding, infuriating, troubling, engaging--is one of the things that puts life in life.

Posted by Brian Yansky at 4:43 AM No comments:

Take What Your Stories Give You

I've written about the martial art of writing. I've done martial arts and I noticed that writing is like it in this way: you have to do a lot of things at once without thinking when you write. You can do this because you've studied each skill separately and because you've practiced a lot. I still think this is true. But I was thinking as I walked Merlin the dog 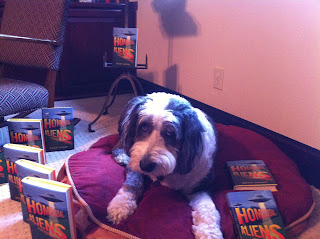 (which is where I do some of my best thinking, such as it is, which is why one of my best pieces of advice for becoming a writer is that you get a dog and that you walk your dog) that even though I now pre-write more than I used to and plan --as I'm working along but still--a lot more than I used to, I STILL DISCOVER new connections and twists and turns in plot and character and new setting ideas as I go along. I think this is because it's the mix, the way the various elements of writing interact  (language, characters, story, setting, conflict) and the way this creates new  insights and new--the technical term is BOOMS--BOOMS in the manuscript. You have to allow this to happen, throw out all your plans and plotting and whatever when it does. Because these booms--or sometimes just tiny and subtle shifts--help you to take your story to places you couldn't have imagined until you do-

To me, this is why formulas do not solve all writing problems as their proponents sometimes claim. It's a big reason why fiction writing can't be reduced to Step 1, Step 2...there's this constant interaction and it creates NEW. The writer has to react to NEW. If she/he does it well, finds the right moves, the manuscript improves. If not--

Learning skills, practicing skills will help you make those right moves but you have to be open to taking what your story gives you, too.
Posted by Brian Yansky at 3:53 AM No comments: