Alien Abduction at the Austin Teen Book Festival yesterday. (See picture)
Teens ask great questions like-- what's an annoying habit you have? And I said talking to my dog about plot points when writing, but then I thought that the habit isn't so much annoying to me (or to my dog)  as to my wife, Frances, who hears me from the other room and shouts, "Are you talking to me or are you talking to the dog again?" 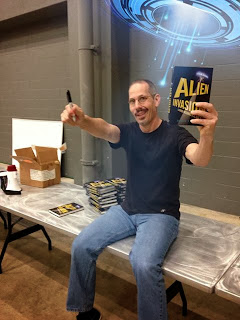 Posted by Brian Yansky at 7:19 AM No comments:

purpose: to practice randomness in structure.

I think a writer works hard and writes a lot and thinks a lot about writing to get to a place where, when he or she writes, he or she DOES NOT think. I'm going to go all Zen here and say that when you write you have to be the story. That means that all you've learned goes into your story, but when you're writing it you don't think about these learned things because you're doing. It's like I've said before when comparing writing to martial arts. If you think, you're too late to react. Writing is like that. If you think, you aren't in the moment of the story. (Revision is another beast entirely!)

Here's an excellent video (from WritingAlchemy) that mentions Bradbury who said he had a piece of paper taped over his workspace that said DON' THINK.

Plot and Story: simple and complex

PLOT AND STORY
I taught this class on using fairy-tales to more clearly see how plots work. Fairy-tales don’t have much character development so it’s easier to see how a story moves. When I was preparing for the class and as I was teaching it, I began to think that it was helpful to think of plot and story differently.
Plot is simple.  It’s just what happens in the story.  You need to have it to keep things moving along. This happens. That happens.  Looking at fairy-tales is very helpful for this.

Story is the complications, complexity, contradictions, desires, obstacles that make a novel the messy thing we all love. These developments give depth to the plot. There’s external character motivation and internal motivation. Often times these drive the story. There’s the subtext that gives greater meaning to the story. There’s what the characters want and what gets in the way of that and the result. There’s the theme: what’s it all about? And more.  It’s easy to get lost in all this.
So once you have a draft and you’re trying to see what you have might consider the differences between plot and story; it might help to summarize what happens in a chapter by chapter kind of way and analyze plot and then look at what else is going on. It’s one way to see your draft from another perspective.
For another way of looking at this see these plot questions from the editor Cheryl Klein
http://chavelaque.blogspot.com/2011/06/plot-questions.html

Homicidal Aliens & Other Disappointments has been released after a short sentence and then some longs ones and then some more short ones all got together and made a book.
I'm happy to announce that Homicidal Aliens & Other Disappointments--a work of imagination--  has made it into the real world. I love books and I'm proud and happy to have made one.  Still I accumulated a lot of rejections along the way --each one, as Steinbeck once said, a little death. Rejection hurts. But all it takes is one acceptance and the rejections don’t really matter.  I don’t think that JK Rowling is too broken up over the dozens of rejections of Harry Potter. A few things have happened since that have made those rejections pretty unimportant—except to the people who rejected her book.
So here’s a site worthy of a look—always fun to read about the rejections of books that went on to become classics or popular or both...
http://www.literaryrejections.com/best-sellers-initially-rejected/
AND
“Outside of a dog, a book is man's best friend. Inside of a dog it's too dark to read.” Groucho Marx
Here’s Merlin excitedly celebrating the release of Homicidal Aliens (hmmm…that doesn’t sound good but is)… 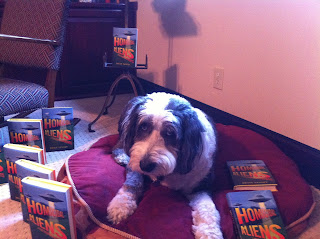 Posted by Brian Yansky at 5:03 AM No comments:

To Outline or Not to Outline?


Some people think you must outline. They argue that by having a plan you'll be more likely to have a clear structure to your work. You'll also know your ending and can write toward it. Maybe they're right.

Others say no. Outlining stifles their creativity. They feel like they're forced to follow the outline and so it ends in bad decisions. They think no plan is the way to go.
•Some authors who favor this method.
•“How can I know what I think till I see what I say?” E.M. Forster
•“I do not plan my fiction any more than I normally plan woodland walks; I follow the path that seems most promising at any given point, not some itinerary decided before entry.” ― John Fowels
HERE ARE THREE TAKES ON THE IDEA OF OUTLINING:
Andre Dubus is against it. Spontaneity is everything. He needs to feel he can go anywhere.
Meg Cabot likes a bit of an outline. A little here and there, particularly toward the middle and definitely at the end but with long stretches where she will invent as she goes along.
John Irving outlines his whole novel. In fact he spends a year outlining. He won't even start until he knows the last line of the novel. Then he organizes the book backward so that he can get to the first line.

My method is something of a hybrid. I begin with a situation. A character who is in a certain situation. Then I write a very rough first draft, putting notes and markers in places rather than writing whole scenes and writing whole scenes in other. I rush to get this first draft done. It will be much shorter than the actual novel. It's kind of a discovery draft; it will be maybe 150 pages. But what it gives me is a true sense of the ending.
When I revise I write toward that ending. It might change. Certainly many, many things in the draft will change. But I write toward it, knowing that the ending will be somewhere near that original ending. I build on the novel, deepening character and story, adding more than I take away. That second draft is a real draft.
Then I start the process of revision.
It works for me. Everyone is different though. The three writers in the vids are all very successful. They just have different ways of working. What's important is that each writer finds his or her way.