Zoom to a first draft of your novel (abbreviated) in under a week: Write a Zoom Draft

First, the disclaimer: This method is a work in progress so I haven't gone all the way through the process of revising a novel yet. I will keep you posted on how long the next step takes. My second point is that some may say I'm just talking about an outline. That is in a sense true EXCEPT I will say that I never have been able to outline my novels. I began writing novels with absolutely no outline. In the past few years I've managed a page of outline when I start a novel an then outlining as I go along, which is some combination of coming up with potential plot points based on what I've written and the kinds of plots I'm writing, adding to character sketches, and doing world building based on the world I seem to be creating in my draft.

OK so let me describe this new process, writing what I'm calling a Zoom draft. This comes from the fact that I cannot outline but that my first draft often goes all over the place as I pants my way through a story. It's a discovery draft and I, well, discover. So what happens is I always seem to have to rewrite huge chunks of it, which leads to major changes through-out the story. I don't like this. It seems a waste. However, I am a fairly fast writer and a first draft does get me into the world and characters and story so I have kept on with this method. I can write a first draft in less than two months but not that much less. Then I spend another two, sometimes three in revision.

It's not a bad method but I feel like I waste a lot of time and go the wrong way a lot in my first draft. The reason revision takes me so long is because I am actually rewriting a lot of it. That's much more than revision. Throw away a chunk and write a new chunk is a longer process.

So I was playing around starting a novel and thinking about the months I would spend on getting the story together and I thought what if I just tried to write the story and didn't worry about development of characters or world so much and focused on pushing through the story without a lot of details. What if I did a general draft. More than an outline. I'd write out chapters, bits of whatever would be in the chapter in terms of description and narrative and especially dialogue between characters. I would also write anything that I thought might add to my understanding of the chapter. I wouldn't sweat forcing myself to try to figure out places where I got stuck. I'd just write myself a note about what might happen and go on.

It took me four days to write one first draft of about 10,000 words. Then I tried another novel, this one second in a series, and it took me five days to write a draft of that novel, 12,000 words. Obviously, these are a fraction of what these novels will be BUT I write from beginning to end. That, I think, is essential.

Now I am revising the second novel, the one I need to get out next. I'm in my second day and it seems like I"m not having to rewrite so much as add to what's already in the chapter. But even if I do have to rewrite later as a I go along, it only took me five days to get this rough draft out. And because it only took me five days maybe it will be more cohesive than my other first drafts. As I was writing it, I felt like I had more control, more narrative momentum.

It seems to be working.

MORE when I have written MORE but for me, for the kind of writer I am, a pantser whose first draft always sucks and someone who would like to up my output, this seems to be working.  (To Be Continued)

Posted by Brian Yansky at 1:49 PM No comments:

My number #1 tip for writing, or so I think today: time your writing, whether its 15 minute sprints or an hour, and write down how many words you write in that 15 minutes or an hour and do not allow ANY distractions. See what I did there? I snuck in three points by using co-ordinating conjunctions but, in my defense, they are related: Time, count, and focus.

ALSO, MY NEW NOVEL IS SOON TO BE OUT and I'm discounting it to 0.99 cents for the next few preorder days and for the first five days it's available.https://www.amazon.com/gp/product/B09VTC2PZX/ref=dbs_a_def_rwt_hsch_vapi_tkin_p1_i7 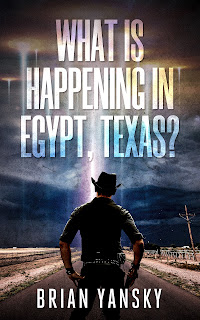 They’re Here. But who are They? How long have They been here? What do They want? Where do They come from?July Jackson wakes up in Egypt, Texas (population 1888). He can’t remember the night before. When he steps outside, he sees snow. Temperature gage says 27. It’s August. None of the phones, tv’s, computers, or vehicles work. The entire town is cut off. July is sheriff. It’s his job to protect the town. His duty. Soon he realizes he’s in for the fight of his life, and the enemy isn’t only strangers outside the town limits but neighbors within. An SFF Suspense Mystery

Thanks for stopping by. Brian

Posted by Brian Yansky at 8:38 AM No comments: