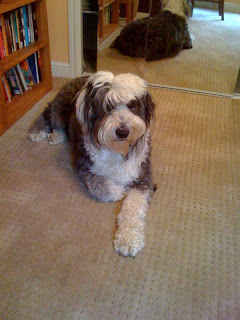 Or so I think today.
Posted by Brian Yansky at 5:50 AM

Hooray on your first year of blogging! And I have to say that I just love this line:
"No writer, on any given day, really knows more than a sheepdog happily chewing away on a manuscript."

Thanks, Anna. I've appreciated your reading and comments over the year.

I'd like to offer a different explanation of why your dog ate your ms, via an example of my own dog's dining habits. She ate whatever I spent time on. For example: an elderly relative gave me an entire collection of Dickens, which was far more elderly than she. I was intent on reading the entire collection. When I was on the final volume, I came home from work one day to find the living room scattered with fine confetti. The only clue to which book my dog had EATEN was one word...Edwin. The mystery of Edwin Drood remains a mystery to me to this day.

That's funny, but the motivation with your dog sounds like jealousy though of course he might just have a taste for Dickens(sorry).

Congrats on your first year. I'm really glad that I found your blog. I've enjoyed reading it a lot.