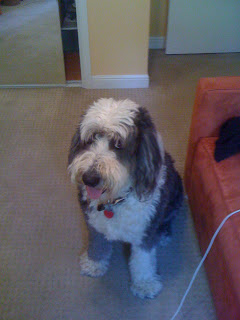 Last week (three years ago) my Old English Sheepdog, Merlin, pulled some of the manuscript pages of my latest WIP from my desk and began to eat them. Merlin, like most dogs, is adept at non-verbal communication. Of course he is also, another noble trait of the canine, notoriously good-natured and non-judgmental. I wondered what could have driven him to such uncharacteristic and extreme criticism.
After I managed to wrench the somewhat chewed but readable manuscript pages out of Merlin’s toothy grip, I started to read them. A growing uneasiness began at the nape of my neck and spread and that uneasiness became queasiness and that queasiness became despair. It was, alas, all wrong. Started in the wrong place. Went on too long here and not long enough there. Most importantly the life, somehow, had been squeezed out of it and the characters moved as if they were clueless stick figures rather than living creatures.
Merlin was right.
So though I am going to write about writing in this blog, and though I’ve written a lot of words and sentences and pages and have learned, maybe, a few things that might be of some small use to beginners, the truth is no writer, on any given day, really knows more than a sheepdog happily chewing away on a manuscript. And what we know on any given day is sort of a stab at the truth. Another day we might feel differently. I should probably end everything I say about writing with—Or so I think today.
That’s a good idea.
Or so I think today.
Posted by Brian Yansky at 3:45 PM

Very cute little dog you have! My seo company Arizona team appreciates this so much! Thanks for showing us the picture of your dog.